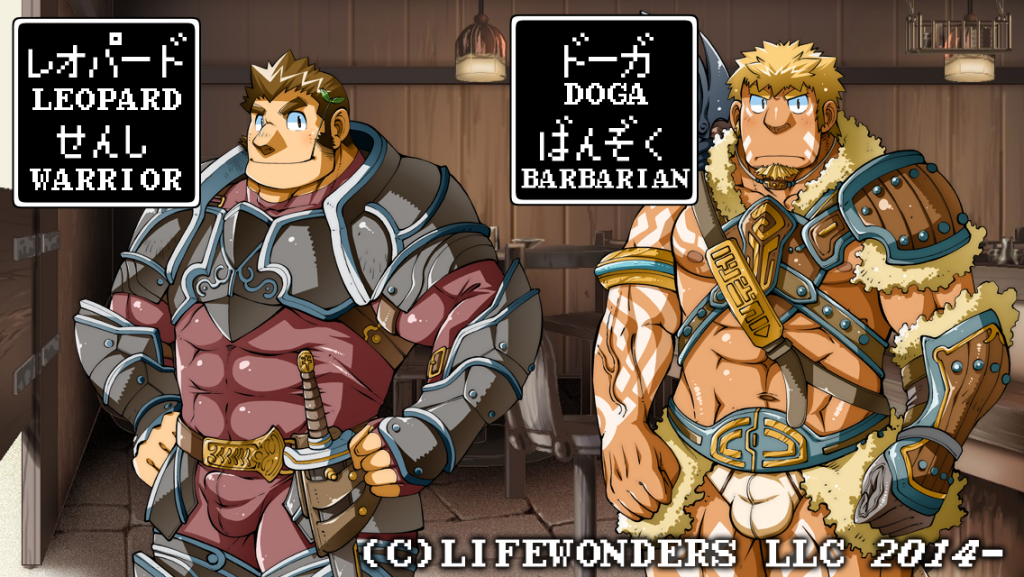 A warrior adventurer looking to get rich quick by taking on quests.
People call him Leo.
He’s always avoiding Gordon because of his outstanding tab at the tavern.
While he’s a friendly brother figure, his tendency to fall in love could be his downfall.
Could befriending him lead you both down the path of new love…?!

A barbarian of few words, but one who is loyal to the end.
Since he was raised in a small village, he appears uninterested in city life.
It seems he was elected to find a certain item that may be able to save his clan…? 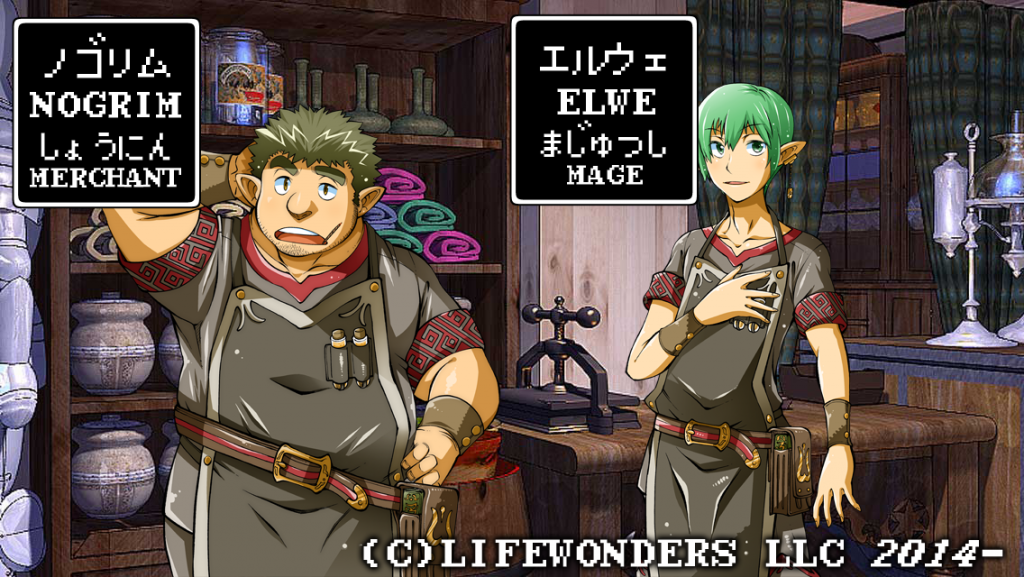 A man who runs a second hand magic shop in Midgard.
His mother was an elf and father a dwarf, but it seems the blood of his father, who was an expert craftsman of magic items, runs strongest in his veins.
He’s been on many adventures and gathered many powerful magic items.
As a result, he’s well known among adventures that collect strange items.

Nogrim’s younger brother who resembles his elven mother.
He inherited his mother’s strange sense of beauty, and thinks his brother is the coolest guy in the world.
He fled his homeland of Iluvatar for Midgard with many others after it was destroyed by the Demon King.
Now that he’s living with his brother, he couldn’t be happier. 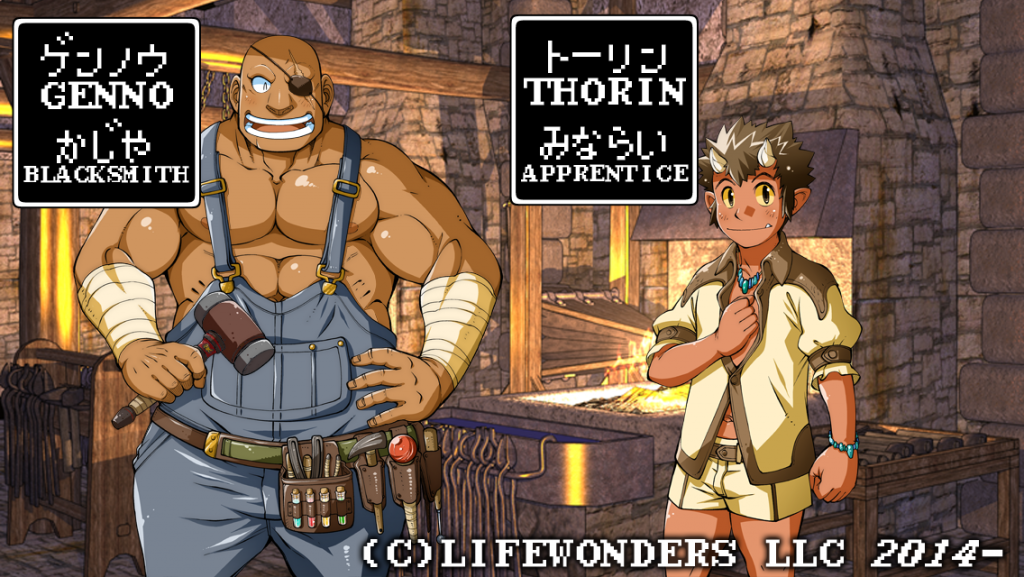 A blacksmith from lands east of Midgard boasting some pretty hefty muscles.
He used to be in a party with Gordon (the barkeep).
After losing sight in one eye to a curse, he became a first-rate coach who can judge an adventurer’s strength and skill at weaponry just by feeling their muscles.

A young ogre boy from the the western lands of Valinol.
He is the son of Orgus’ assistant Dorin.
He came to Midgard after the destruction of his home to become a blacksmith apprentice.
Possessing superhuman ogre strength but a timid personality, he goes back and forth delivering weapons to the soldiers in the castle.
Genno hopes to raise him into a man with proper muscles. 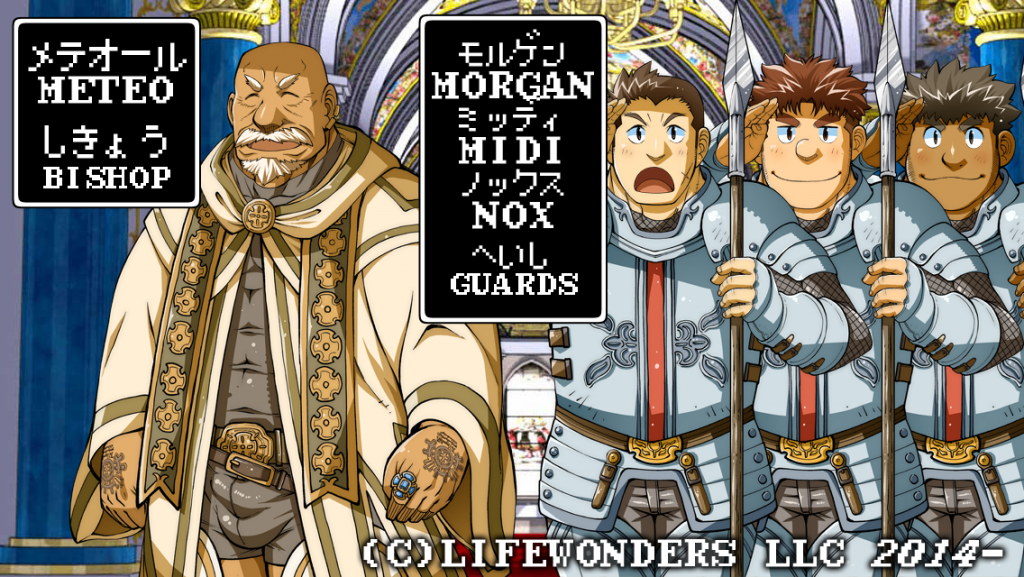 The leader of the church of monks who fight back against the Demon King’s army.
The most powerful man in the church, he possesses such a sculpted figure that it’s hard to believe his age.

Managing not only to earn the title of bishop, he is popular for traveling to many countries to save people from demons.
He often trains the soldiers at the castle, and as a result has more than a few admirers in their ranks.

He raised Sol himself after taking him in as a child, making him both a teacher and father to him.
After advising the king since he was young, the two have developed a close relationship that gives him a free pass to enter the castle and even the king’s private chambers.
But now, a rumor has spread that he may be missing…?!

Royal guards who protect Midgard castle.
The castle is on a three shift rotation, so you can see them if you visit in the morning, afternoon, and evening.
They have completely different personalities, and the other knights to each have their own opinions about them.
If you’re lucky, you might catch these expert soldiers drenched in sweat as they hone their skills at the training grounds. 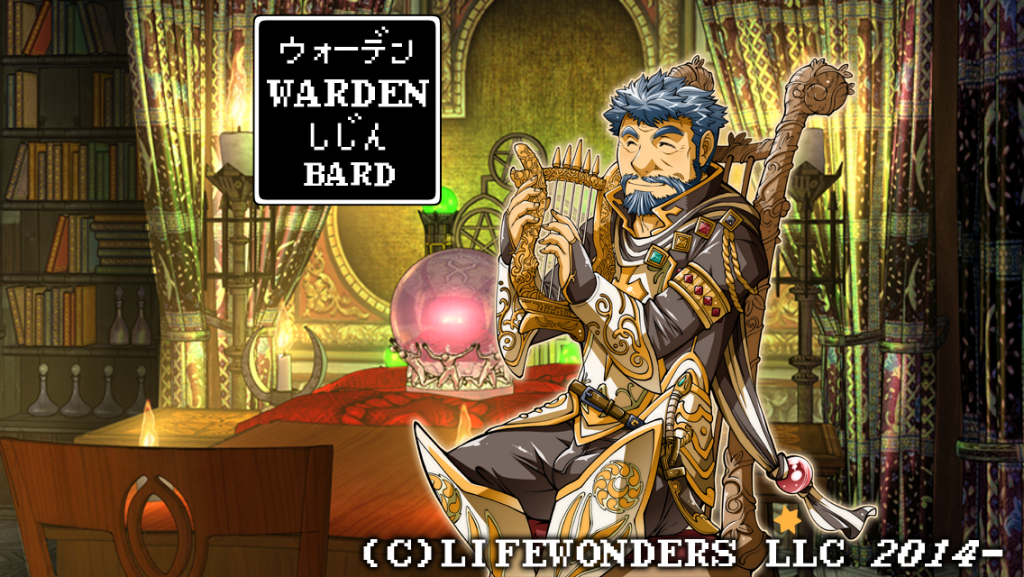 A wandering bard you meet on your travels who possesses a strange power.
Playing his beautiful instrument, he sings tales of distant, unknown worlds. 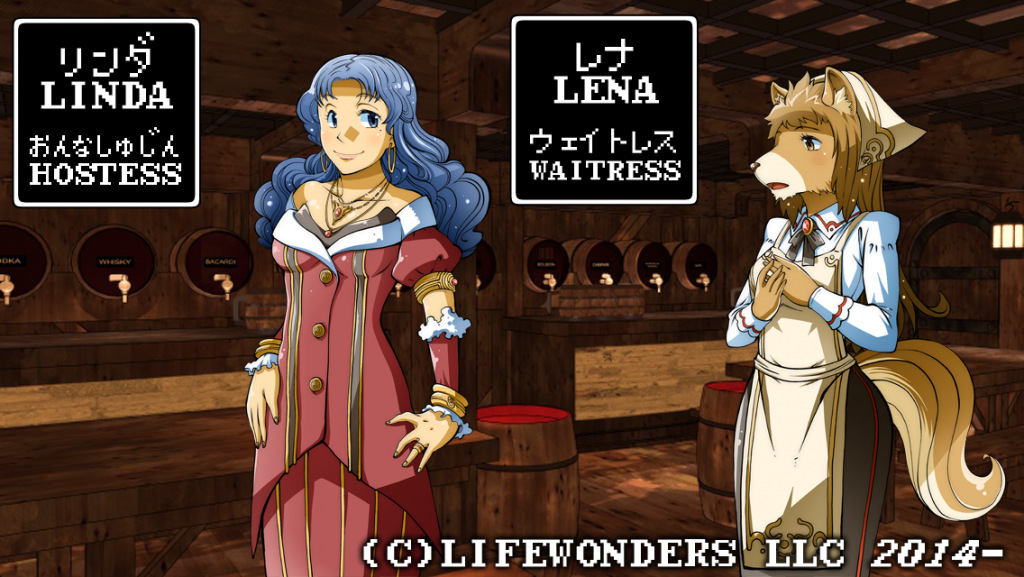 A hostess at a tavern in a large bazaar for traders located in the Valinol Desert to the west of Midgard.
She has a unique allure that attracts rowdy adventurers from far and wide.
With so many travelers passing through her tavern, she is extremely well-informed.
You’ll likely seek her for information on more than one occasion.
The rise in fights and overall state of the bazaar after the Demon King’s revival troubles her greatly.
She is an old acquaintance of Gordon, the barkeep at the Adventurer’s Tavern.

A waitress employed by Linda at the desert bazaar tavern.
Her brother is the leader of the Valinol knights, and she used to work as an attendant for the king of Valinol.
After the destruction of the capitol at the hands of the Demon King, she fled to the east.
She calls Linda “Ma’am” and feels deep gratitude towards her for taking her in when she had nowhere else to go.